To identify positive cases and confirm whether someone is contagious in less than five minutes. 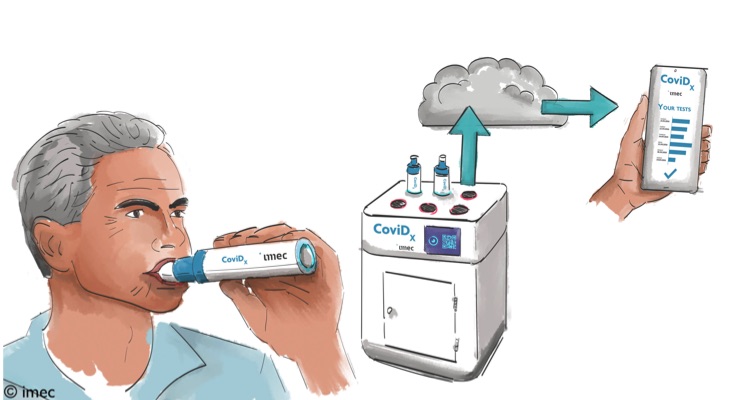 Imec announced that it has started developing a groundbreaking SARS-CoV-2 test.
Unlike current approaches (using blood, saliva, or a nasopharyngeal swab), the new test will identify SARS-CoV-2 virus particles in a person’s exhaled breath.
The solution promises the accurate identification of a contagious case in less than five minutes.
This will make for faster, easier, more comfortable, and larger-scale testing – an essential requirement for getting a grip on epidemics much sooner while limiting their economic and social impact.
Imec is teaming up with the UZ Leuven University Hospital for the solution’s clinical validation.
By the summer of 2021, imec intends to test a functional prototype at Brussels Airport.
This year, it has become abundantly clear that viruses are capable of striking hard and turning people’s lives upside down.
In order to minimize the effects of epidemics and pandemics on our health, society, and economy, governments and experts need to be able to swiftly and accurately assess how a virus is spreading.
Today’s SARS-CoV-2 diagnostic tools come with quite a few limitations, however.
The most sensitive and reliable tool today is the polymerase chain reaction (PCR) test that aims at detecting the virus’s genetic material in a nasopharyngeal specimen.
This tool's downside is that trained medical personnel must collect the swab, and the process is described by many as highly uncomfortable. Moreover, the test comes with a processing time (in a clinical lab) of about two days.
Another alternative, the rapid antigen test, is less reliable due to its complexity. Lastly, the serological test (which uses a blood sample) is faster and less expensive than a PCR test but only detects whether someone has developed antibodies after the person has been in contact with the virus.
“While each of these tests can provide clues about a current or past infection, none of them can determine to what extent someone can still pass the virus to others. That is why we have started developing a test that indicates, in less than five minutes, whether someone is carrying the SARS-CoV-2 virus and whether they have a high probability of being contagious. To accomplish this, our solution looks for SARS-CoV-2 virus particles in a person’s exhaled breath because research shows that breath particles are the virus’s main transmission method,” said Peter Peumans, CTO of Health Technologies at imec.“Provided positive results in our clinical studies, our tool will make testing for SARS-CoV-2 easier, faster, more comfortable, and possible on a much larger scale. Moreover, we are designing our test to flexibly cope with the rise of other viruses and germs that spread via exhaled particles – such as influenza, RSV, and tuberculosis.”
“It is now clear that the virus is transmitted pre-symptomatically via exhaled particles. SARS-CoV-2 testing via breath sample coupled with an ultrafast molecular analysis would be game-changing since it would allow for the timely detection of individuals who are most likely to transmit the virus. Because a breath sample is much less invasive compared to swabs or saliva, it would also allow for more frequent testing and a faster return to normal," added Peter Piot, microbiologist and member of the European Commission advisory panel on COVID-19.
Imec’s solution consists of a sample collector and an analysis unit, both of which are being custom developed by imec researchers.
Researchers are focusing much of their attention on the sample collector, which will act as the aerosol (and virus particle) collector and support the solution’s high-speed real-time quantitative (RT-q)PCR functionality.
“Merging these tasks using conventional technologies would be extremely hard to do. But thanks to our innovation capability when it comes to using silicon, we have developed a chip that effectively does both. Its silicon microscale PCR cavities make for thousands of impactors that allows us to capture the viral particles, while its powerful RT-qPCR functionality brings down the duration of the PCR effort from 50 to 5 minutes. Importantly as well, the standard silicon technology used to build this chip facilitates mass production at a low cost,” Peumans said.
“Thanks to a grant of €2 million provided by the Flemish government, we are off to a flying start,” added Luc Van den hove, CEO of imec. “After all, the speed with which we will be able to bring this test to the market will greatly depend on the proper financial support. In anticipation of other investors joining this effort, imec has decided to pre-invest the necessary resources as part of our contribution to the global fight against COVID-19.”
Following the development of the underlying technology, experts from the UZ Leuven University Hospital will team up with imec to engage in an extensive clinical study.