At the Printed Electronics USA 2015 conference and exhibition, five companies and universities were awarded for their achievement in developing and commercializing printed electronics technologies by IDTechEx, the show's organizer.

The awards were presented to the five winning companies by Ralph Russo, founder and chairman of the board of Novasentis, who has also had a prolific and highly successful career as an executive at Apple, Honeywell, Bay Networks and Nortel Networks. The entries were judged by Andrew Uerkwitz, equity research analyst, Oppenheimer; Prof. Malcolm Keif, California Polytechnic State University; and Andreas Rudorfer, Joanneum Research Forschungsgellschaft mbH.

Vitriflex won this award for having designed, constructed and operated a state-of-the-art manufacturing line for production of transparent ultra-barrier films for use in flexible electronics. Flexible encapsulation is a long-sought enabling technology, critical to the emergence of large-area flexible and printed electronics. The permeation of water vapor and oxygen is a problem in many such applications.

Parker Hannifin develops and produce sensors based on electro active polymer (EAP) technology. The company needed a conductive ink that is capable of maintaining reasonable conductivity when strained up to 100%. After they could not a provider of such a stretchable ink, they developed their own stretchable ink formulation in house. This stretchable electrode ink they developed can strain up to 100% while still retaining conductivity suitable for their needs.

The University of Massachusetts Lowell Raytheon won this award for developing a ferroelectric ink for direct printing of high-frequency voltage variable dielectrics on flexible substrates for tunable RF and microwave applications This ink allows for realizing an all-printed high-frequency voltage variable capacitor on a flexible substrate to be used in tunable RF and microwave applications such as phased array antennas, conformal antennas, and tunable frequency selective surfaces.

The tunable dielectric is a multi-phase barium strontium titanate (BST) polymer composite made by suspending nano/submicron-sized particles of BST in a thermoplastic polymer, namely cyclic olefin copolymer (COC). The composite is further dissolved in a solvent with a dispersant to obtain the tunable nano-BST/polymer ink (TnBST/P ink). The composite benefits from the processing flexibility of the polymer so that only a curing step at temperatures below 200°C suffices to solidify the material, thus bypassing sintering steps traditionally required for ferroelectric materials.

ARMOR SAS won this award for development of Orion, a new solar lamp concept. Most of the powerful portable solar lamps propose a separate solar panel with a limited power peak (<4Wp), which is not very useful when you need to carry the lamp on a regular basis.

Orion solar lamp is a two-in-one concept: the PV module (organic photovoltaics or OPV) is not a separate element but fully integrated within the core of the lamp. The OPV module can be unrolled easily for charging the battery and rolled up manually within the lamp at night or during transportation. The Orion lamp concept can deliver up to 8W peak power, a great advantage to guarantee lighting at night when you may only have a few sunny hours available within the day.

Engineered Materials Systems won this award for the use of their stretchable conductive ink in the successful commercial product MIMO Baby, made by Rest Devices. Rest Devices developed breakthrough wearable technology that combined capacitive sensing, Bluetooth transmission of real-time biological data and a clever way to integrate chip and power.

What they lacked was a conductive ink that would meet their requirements of soft, stretchable and durable. Engineered Materials Systems submitted their flagship silver conductive ink, CI-1036 which worked very well according to Rest Devices engineers and was a key enabler to commercialization of MIMO Baby. CI-1036 is applied to proprietary film and insulated with a proprietary top-coat. This combination is reported by Rest Devices to withstand 90 wash/dry cycles of the MIMO Baby kimono with the failure mode not due to the conductive circuitry.
Related Searches
Suggested For You 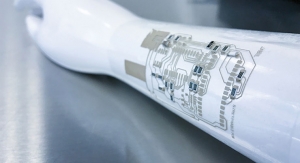 The Growth of the Flexible Hybrid Electronics Market 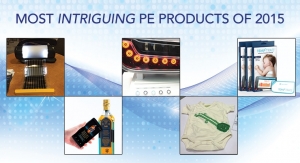 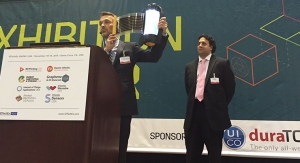 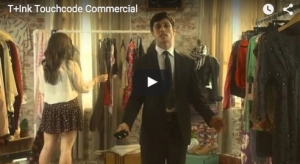 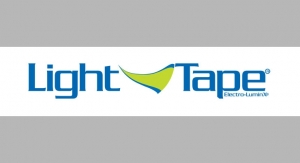