Chalmers’ e-paper contains gold, silver and PET plastic, with the layer that produces the colors less than a micrometer thin.

Researchers at Chalmers University of Technology have developed the basis for a new electronic “paper.” Their results were recently published in the high impact journal Advanced Materials. Less than a micrometer thin, bendable and giving all the colors that a regular LED display does, it still needs 10 times less energy than a Kindle tablet.

When Chalmers researcher Andreas Dahlin and his PhD student Kunli Xiong were working on placing conductive polymers on nanostructures, they discovered that the combination would be perfectly suited to creating electronic displays as thin as paper. A year later, the results were ready for publication. It is a material that is less than a micrometer thin, flexible and giving all the colors that a standard LED display does.

“The ‘paper’ is similar to the Kindle tablet,” said Dahlin. “It isn’t lit up like a standard display, but rather reflects the external light which illuminates it. Therefore it works very well where there is bright light, such as out in the sun, in contrast to standard LED displays that work best in darkness. At the same time it needs only a tenth of the energy that a Kindle tablet uses, which itself uses much less energy than a tablet LED display.”

It all depends on the polymers’ ability to control how light is absorbed and reflected. The polymers that cover the whole surface lead the electric signals throughout the full display and create images in high resolution. The material is not yet ready for application, but the basis is there.

The team has tested and built a few pixels. These use the same red, green and blue (RGB) colors that together can create all the colors in standard LED displays. The results so far have been positive, what remains now is to build pixels that cover an area as large as a display.

“We are working at a fundamental level but even so, the step to manufacturing a product out of it shouldn’t be too far away. What we need now are engineers,” Dahlin noted.

One obstacle today is that there is gold and silver in the display, which makes the manufacturing expensive.

“The gold surface is 20 nanometers thick so there is not that much gold in it,” said Dahlin. “But at present there is a lot of gold wasted in manufacturing it. Either we reduce the waste or we find another way to decrease the manufacturing cost.”

Dahlin thinks the best application for the displays will be well-lit places such as outside or in public places to display information. This could reduce the energy consumption and at the same time replace signs and information screens that aren’t currently electronic today with more flexible ones.
Related Searches
Suggested For You

Sales of Books in Print are Rebounding 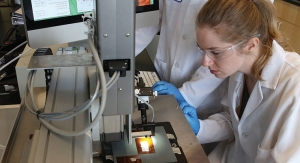 Universities are Conducting Cutting-Edge Research on Flexible and Printed Electronics