Potential-induced degradation is one of the most critical failure modes in (bifacial) photovoltaic systems. 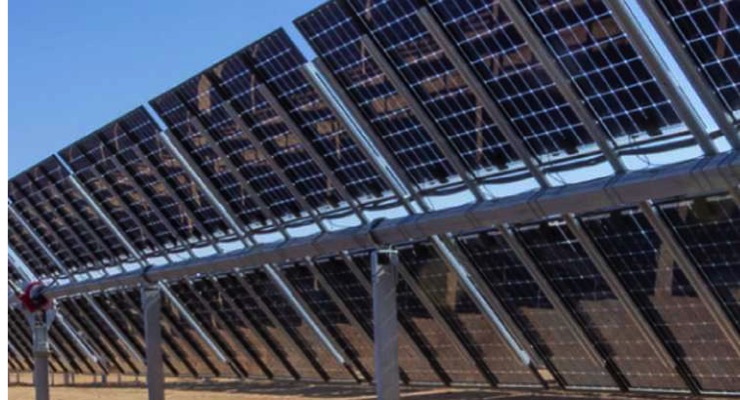 Photovoltaic (PV) systems are one of the only electronic devices that are expected to survive outdoors for 25 to 30 years making module and system quality one of the cornerstones of guaranteed return on investments.
Although R&D in PV reliability has made tremendous progress in the last decades the work is far from done.
Many problems remain still a puzzle and as technology evolves new challenges are also on the rise. PID (potential-induced degradation) is one of the most critical failure modes with a high financial impact.
With research into new materials and PV technologies, PID always has to be carefully investigated. Insights into the physical mechanism of the performance loss and adequate testing methodologies are crucial to develop adapted solutions at all levels.
Bifacial photovoltaics (PV) technology has maintained considerable interest over the years in the sector because it promises a high energy yield.
Bifacial cells absorb 5 to 20% more light because they also harvest it from the rear side, and the technology could be also integrated into existing production lines. Recently, bifacial PV has found its way to the market and end-users and is gaining rapidly on market share.
Integrated into modules, bifacial cells are being installed in utility-scale power plants and on rooftops where light reflection from the rear is possible.
Also, imec’s research recently has received a push, strengthening the collaboration with the world’s leading manufacturer of N-type TOPCon bifacial technology, Jolywood, to launch more and more high-performance photovoltaic products.
However, broader acceptance from the entire value chain, including financial institutions, is still lacking.
On the one hand, PV projects are typically built for 30 years and a large financial injection upfront is needed.
On the other hand, further R&D efforts are still required to improve the performance and reliability of bifacial PV modules with tailored characterization and reliability testing.
Advancing our knowledge of failure mechanisms and how to mitigate them, is an essential part of bringing bifacial technology to its full potential.
Potential-induced degradation (PID) has been shown to induce significant reliability issues and even failure in bifacial cells, modules and installations.
It arises from high system voltages that promote ion drift (mostly sodium) towards the solar cell. These ions interrupt the proper functioning of the solar cells and cause a loss in conversion efficiency.
With PV system voltages of up to 1500 V entering the mainstream to reduce costs for increasing scales of PV parks, PID becomes even more critical.

PID: ion drift (mostly sodium, Na) towards the solar cell under influence of a strong electric field (green arrows).
The occurrence of this failure mode depends not only on the magnitude but also on the polarity of the electric field. That is why PV modules in an array located at the positive pole of the string are not affected by PID since the sodium drifts away from the solar cell.
The degradation starts around the perimeter at the negative pole and gradually spreads further away from the PV modules’ frame.
Though PID happens in monofacial cells as well, it causes more harm in bifacial cells in glass/glass packaging since the mechanism can be triggered from two sides.
More intricate device architectures with thinner layers also seem to be more sensitive to it, hinting at critical research in the field of TOPCon and other advanced cell types.
“In terms of reliability, PID is one of the main challenges that face bifacial technology. A PV panel may look intact on the outside, but the impact of minuscule ions migrating on the inside is huge," said Eszter Voroshazi, R&D manager of PV technologies and system teams at imec. "It can destroy an entire system in a few months’ time in case rapid migration is triggered. In large PV plants with long strings, the mechanisms might progress just slow enough to hinder correct detection for years causing significant performance and revenue loss. Advanced field imaging and testing procedures are necessary to detect the process. Furthermore, it is not enough to build up academic knowledge about the topic. To propose relevant solutions, one also needs to consider the industrial requirements and boundary conditions.”
Imec, together with EnergyVille/UHasselt, has built up vast expertise in understanding the physics behind PID and in in-depth testing.
One example entails the origin of the ions. Previous research showed that a particular type of PID (“PID of the shunting type,” PID-s) is caused by sodium ions diffusing into silicon stacking faults and shunting the cell.
However, the source of the sodium is still unclear. It may stem from the soda-lime glass (SLG) cover sheet of the PV module or it could already be present on the solar cell surface even before the lamination process. Based on a comprehensive test matrix, the results show that the SLG front cover significantly enhances PID progress.
Samples without an SLG front cover did not display any degradation after more than 300 hours of PID stress. This confirms the hypothesis that SLG is the source of the sodium.
Another example focuses on the physical origin of bifacial PID in bifacial p-PERC solar cells since the degradation behavior does not seem to match only one mechanism.
Indeed, results demonstrated a combination of PID-s and PID-p (“PID of the polarization type”). The latter is a temporary and reversible degradation of the passivation layer, which reduces the performance due to a surface recombination increase.
Moreover, the researchers could extract specific signatures for both degradation mechanisms in IV (current-voltage) and EQE (external quantum efficiency) measurements.

Bifacial PID of bifacial p-PERC solar cells in a glass/glass module configuration.
The testing results and the testing protocols are continually under investigation in PV reliability research.
One testing method for PID is standardized in the IEC TS 62804-1 guideline. In the so-called foil test, a voltage of 1000 to 1500 V is applied between the solar cell-matrix and a conductive foil contacting the module’s glass surface.
The module is then placed into a climate chamber in damp heat to mimic harsh operational conditions in the lab.
A common practice is to apply monofacial PID stress on bifacial PV modules by applying the foil on only one side of the PV module. It has been shown before that bifacial solar cells under rear-side monofacial PID stress show the same degradation behavior as under front-side monofacial PID stress, and therefore the consensus is that the degradation mechanism is the same and that the stressing side is of minor importance.
Yet, recent research at EnergyVille (imec/UHasselt) shows that the foil-method cannot be carried out on only one side of bifacial modules without taking additional measures.
“In a series of experiments, we observed that the cells’ performance suddenly declined on their non-stressed side when monofacial PID stress was applied on bifacial PV modules," said Jorne Carolus, a postdoctoral researcher at EnergyVille/UHasselt. "The PID testing resulted in an unintended development of an electric field between the climate chamber and the solar cell’s non-stressed side. The electric field caused positive charges to migrate towards the solar cell and interfere with its proper working.

A sample inside a climate chamber during rear-side monofacial PID stress. (A) an unintended electric field arises between the grounded framing of the climate chamber (at 0 V) and the front side of the solar cell (at −1,000 V); (B) shorting the non-stressed side cancels the electric field.
“We then proposed adapted testing methodologies and attention points for using methods from the IEC standard when bifacial PV modules are being monofacially PID-stressed. Preventive measures include shorting the non-stressed side of the glass/glass laminate with the solar cell, using a floating high-voltage source, or replacing the glass cover with a PID-resistant cover on the non-stressed side.”
Solving PID issues and optimizing bifacial PV requires system-level thinking. First, the whole system needs to be optimized for an application. Solar panels that go on the roof do not have the same requirements as solar panels for a power plant.
Second, when tackling reliability issues, you solve them on multiple levels to create multiple barriers against failure mechanisms. That way, when one element fails to perform as expected in the field, another element can still protect a truly robust system.
So far different PID solutions have been proposed on different levels. At the cell level, the anti-reflection coating (ARC) plays an essential role in PID sensitivity.
By tuning the conductivity of this layer during the production process, the solar cell is less susceptible to PID. At the module level, alternative materials that render PV modules PID resistant (or ‘PID-free’) exist and are being optimized.
Materials such as PID-free encapsulation materials or aluminosilicate glass limit sodium mobility towards the solar cell. On the system level, with a different grounding schematic, the electrical field can promote the migration of the ions away from the solar cell. Finally, power optimizers or module-level inverters avoid a large voltage build-up between the solar cell-matrix and the grounded module frame thereby enabling lower operating voltages at the module level.
“For PV plants suffering from PID in the field, these preventive measures do not offer a solution. In that case, recovery techniques can be investigated," Carolus said. "One already commercialized solution is to place the solar cell array at a positive bias with respect to the PV module frame during the night. This causes the ions to diffuse back out of the cell canceling out their damaging effect. However, the reversibility depends greatly on the level of PID. We demonstrated that degradation is irreversible when the performance loss exceeds 85%. Early PID detection is, therefore, crucial."
“The strength of physics-based reliability models lies in their predictive value. Voltage, temperature and moisture dependence of the PID failure mechanism can be integrated into a major extension of imec's physics-based yield framework," added Michaël Daenen, associate professor at EnergyVille/UHasselt. "Predictive and physics simulation of the progression of PID consider module material, device properties as well as climate conditions. This will be an essential tool serving PV module producers and material developers as well as PV system designers, EPC and O&M companies. It will enable more accurate prediction of the residual economical value of PV plants already in the field."

PID reversibility: up to 40% PID the recovery level is high; from 85% PID onwards the damage becomes irreversible. PIDs is the degradation caused by PID; PIDr is the recovered PID.
Although PID-testing takes up the major part of reliability studies, imec also works on new interconnection metallization, specifically low-temperature solder alloys.
“Current interconnection solder materials are lead-based and require a soldering process above 180°C. We are developing multi-wire interconnection technologies with a lead-free, low-temperature solder alloy for which we are also designing adapted reliability tests," Voroshazi said. "The new alloy has several advantages. A lower temperature soldering is compatible with a whole new set of materials such as heterojunction devices, thin-film and tandem solar cells. Not having to use toxic material such as lead is also a sustainable solution. Finally, because we solder at such low temperature, we can combine soldering and lamination in one process step.
“We are leveraging imec's vast expertise in lead-free solders for electronics assembly as well as expertise in conducting failure mode and effect analysis (FMEA) to identify critical reliability weak spots and specifically adapted methods. To accelerate acceptance and trust in novel PV technologies, we believe continuously defining reliability and quality testing approach is key. As PV is projected to become one of the main pillars of our future energy system, reliability is not a technology question but also the one of secure supply,” Voroshazi added.
Suggested For You