The current record for a perovskite solar cell is 25.2%, accomplished with the traditional architecture. 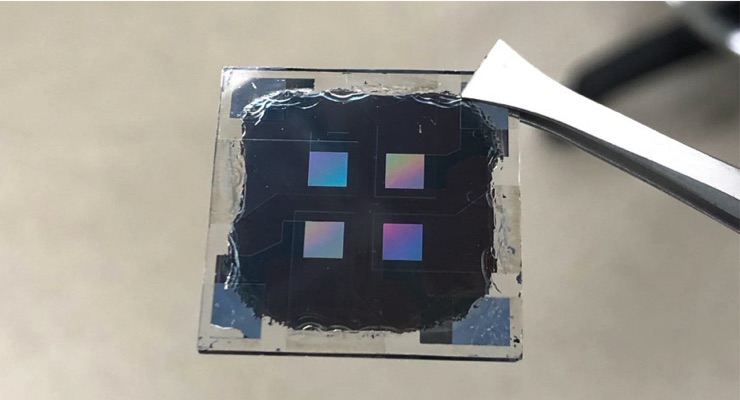 The new perovskite architecture opens the surface up to allow more sunlight to be absorbed. Photo by Kevin Prince/NREL
Related CONTENT
03.18.21

Restructuring the way perovskite solar cells are designed can boost their efficiency and increase their deployment in buildings and beyond, according to researchers with the National Renewable Energy Laboratory (NREL).

Perovskite photovoltaic (PV) cells are made of layers of materials sandwiched together, with the top and bottom layers key to converting sunlight to electricity. The new architecture for the cells increases the area exposed to the sun by putting the metal contact layers side-by-side on the back of the cell.

“Taking the materials on top away means you are going to have a higher theoretical efficiency because your perovskite is absorbing more of the sun,” said Lance Wheeler, an NREL scientist and lead author of a new paper, “Complementary interface formation toward high-efficiency all-back-contact perovskite solar cells.”

Removing metal layers from the front surface also enables solar panels to be seamlessly integrated into building facades. The design improves the aesthetics of the cell and enables manufacturing on several substrates that span glass to sheet metals. The architecture is “camouflage” for solar cells.

This research related to building-integrated PV could reduce a building’s energy consumption. Buildings are the largest sector of the U.S. energy economy. They use 74% of the nation’s electricity and account for 39% of total energy use and 35% of carbon emissions.

“This strategy of putting both contacts on the back is one that's pretty well established in the PV world, but it is new to perovskites,” Wheeler said.

The current record for a perovskite solar cell is 25.2%, accomplished with the traditional architecture.