The 20-µm small sensor has a detection limit two orders of magnitudes better than piezoelectric elements of identical size. 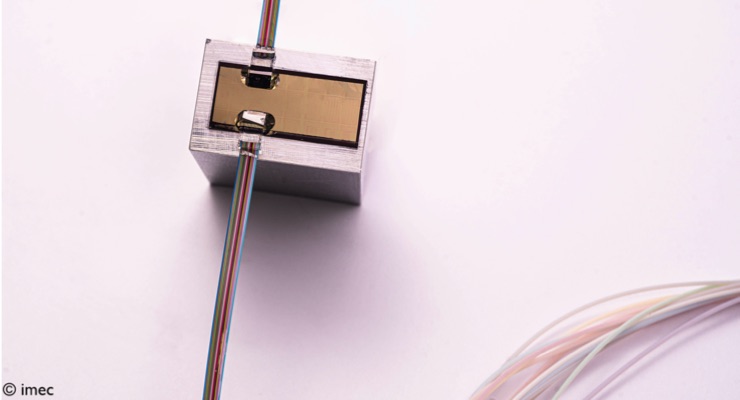 Imec presented an optomechanical ultrasound sensor on a silicon photonic chip that has an unprecedented sensitivity due to an innovative optomechanical waveguide.

Because of this high-sensitivity waveguide, the 20-µm small sensor has a detection limit two orders of magnitudes better than piezoelectric elements of identical size.

The low detection limit of the sensor enables new clinical and biomedical applications of ultrasonic and photoacoustic imaging such as deep-tissue mammography and the study of vascularization or innervation of potential tumorous tissue.

This sensor was presented in a paper, published in Nature Photonics earlier this month.

State-of-the-art piezoelectric ultrasound sensors, however, have their limitations. First, the detection limit depends inversely on the size of the sensors which is a problem for high-resolution imaging with small acoustic wavelengths.

This means that they operate in a small range around the resonance frequency to avoid high detection limits. Finally, matrices of piezoelectric sensors require one wire for each sensor element, hampering e.g. catheter applications.

“The sensor we have demonstrated will be a gamechanger for deep tissue imaging in otherwise non-transparent tissues such as skin or brain. For applications such as sub-cutaneous melanoma imaging or mammography, it enables a more detailed view of the tumor and vascularization around, aiding in a more detailed diagnosis,” said Xavier Rottenberg, fellow wave-based sensors and actuators at imec.

Imec’s solution is based on a highly sensitive split-rib optomechanical waveguide fabricated using new CMOS-compatible processing. The sensitivity is two orders of magnitude larger than a state-of-the-art device.

A low detection limit can improve the trade-off between imaging resolution and depth for ultrasound applications, and is crucial for photoacoustic imaging, where pressures are up to three orders of magnitude lower than in conventional ultrasound imaging techniques.

Furthermore, it may enable low-pressure applications like through-skull functional brain imaging, which suffers from the strong ultrasound attenuation of bone.

Finally, a fine-pitched (30 µm) matrix of these tiny (20 µm) sensors can be easily integrated on-chip with photonic multiplexers. This opens the possibility of new applications such as miniaturized catheters because the sensor matrices require only a few optical fibers to be connected instead of one electrical connection per element in the case of piezoelectric sensors.

“The sensor technology forms the backbone of the photoacoustic roadmap developed within imec and is further tested at selected partner sites,” Rottenberg said.