The process involves a silver paste screen-printed onto a silicon wafer and then quickly fired in a belt furnace.

Scientists at the Energy Department’s National Renewable Energy Laboratory (NREL) and SLAC National Accelerator Laboratory have been able to pinpoint for the first time what happens during a key manufacturing process of silicon solar cells.

Their paper, “The formation mechanism for printed silver-contacts for silicon solar cells,” appears in the journal Nature Communications. The paper was co-authored by NREL’s Jeremy Fields and SLAC’s Imteyaz Ahmad, and the principal investigators on the project were Maikel van Hest of NREL and Michael Toney of SLAC. The other researchers involved were NREL’s Philip Parilla, SLAC’s Vanessa Pool and Douglas Van Campen, and Stanford University’s Jiafan Yu. Stanford operates SLAC.

The paste used in the manufacturing of the solar cells contains silver powder, glass frit (a mixture of metal oxides, such as lead oxide, boron oxide, zinc oxide, and bismuth oxide), and an organic binder. Researchers are looking for an alternative because silver is costly and lead oxide in the glass frit can harm the environment. Before alternative materials can be chosen, however, a better understanding is needed of what takes place during the firing process.

The research focused on identifying the silver-contact reaction mechanism that occurs during the manufacturing of silicon-based photovoltaic cells. The process involves a silver paste screen-printed onto a silicon wafer and then quickly fired in a belt furnace at temperatures between 750-800 degrees Celsius. Even though the process has been used for decades in silicon solar cell manufacturing, exactly what happens during the firing step has remained unknown because the firing process happens in only a few seconds.

Use of the X-rays allowed researchers to learn that between 500-650 degrees Celsius, the antireflective coating on the solar cell is etched by lead oxide in the frit, allowing the frit to contact the silicon. Above 650°C, the silver dissolves into the molten glass frit and interacts at the silicon surface. Upon cooling, the silver precipitates and solidifies in the glass frit, allowing electrical contact to the silicon.

The researchers tested the difference in solar cells made in a furnace filled with nitrogen versus oxygen. The firing process using nitrogen resulted in the formation of more metallic lead, reducing the solubility of silver in the molten glass. In the presence of oxygen, silver dissolved readily into the glass when temperatures are higher than 650°C, causing more silver to eventually end up at the silicon surface and in turn forming a better contact.

Conductive Inks and Paste: Everything is Changing 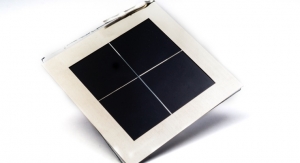