Leading corporations and young start-ups alike share their vision of the realities and possibilities of technology.

During the opening day at Printed Electronics USA 2016, organized by IDTechEx at the Santa Clara Convention Center, Santa Clara, CA, major corporations and smaller companies offered attendees a look into the present and future of flexible and printed electronics, wearables, sensors, the Internet of Things, 3D printing and more.

The Keynote Session features speakers from Google, Unilever and Intel. Heidi Dohse, Google senior program manager and founder of Tour de Heart, began the session with “The Internet Of Me - Data Empowering Patients.”

Dohse is a survivor of heart disease, and has worn a pacemaker for 30 years. She is an avid athlete, and wearables allow her to continue bike racing.

“I am 100 percent dependent on my pacemaker,” she said. “Sensors collect data on every heart beat, checks for abnormal rhythm, and is enabled with wi-fi, which allows the data to go to wearables. This data offers a ‘window’ into my body. We can bypass traditional care and build the future of health care through wearables that collect data every minute through multiple sensors. That will empower patients to make their decisions on their healthcare.”

John Snow, global customer packaging manager for Unilever, analyzed “Creating Global Opportunities and Purpose for Printed Electronics Through the Eyes of a CPG.”

“Branding has to get the message across,” Snow said. As an example of using printed electronics, Unilever and Novalia created a store display for Knorr where shoppers could touch a button and receive advice from a chef. “Our sales increased when shoppers used the button,” Snow added.

Dr. Achin Bhowmik, VP and GM of perceptual computing at Intel, covered “Adding Human-Like Sensing To Devices With Intel RealSense Technology.” “We are at an inflection point,” said Dr. Bhowmik. “We want to add human-like sensing to devices. Markets for our RealSense 3D systems include autonomous robots and drones, virtual and augmented reality and visually intelligent mirrors.”

Winnifred Noorlander, public relations for the Nuon Solar Team, finished the keynote session with “Solar Car: Together We Power the Future.”

“We drove 3,000 miles using the power of the sun, and won our eighth solar car championship,” Noorlander said, adding that elements of 3D printing, energy harvesting and storage and wearables played a role. “There are start-ups being generated from this.”

After the keynote talks, Track 1 featured a panel of end users, including Snow of Unilever, Boeing design engineer Jeffrey Duce and Frank Fu, senior technologist, ETA Global R&D at The Coca-Cola Company. They discussed opportunities as well as challenges ahead.

“Cost isn’t quite there yet, but it is getting close,” Snow said. “However, impact to margins are the last thing a brand owner wants to happen. If NFC technology costs less than 1 cent, that’s still $10 million on $1 billion of sales. We need to determine the use and value of bringing the technology to life. Integration is key, as there are great ideas, but these are only one piece of the puzzle. We need to put these pieces together.”

“Cost is going down,” Fu added. “If you bring in a new experience for consumer engagement, there is value there. Our challenge is finding the right partner to someday transition into printed electronics.”

Johannes Winkelmann, technology evangelist for Sensirion, discussed “Environmental Sensing - Use Cases And Context Awareness.” He noted that Sensirion has 400 million sensors in the field, including 100 million in phones.

“Today’s sensors are easier to use, low cost and enable new markets,” said Winkelmann. “Our focus is on environmental sensors that measure humidity, temperature, differential pressure, gas and flow.”

Jason Marsh director of technology for NextFlex, covered the area of flexible and hybrid electronics (FHE).

“Fabric sensors are making gains in automotive, sports and fitness and consumer health,” he said. As an example, McMillen noted that smart helmets are being developed that show the severity and location of where impact occurs on the helmet. “Where you are hit matters,” McMillen added.

“Electro Active Polymer (EAP) strain sensors are made of silicon, and can stretch to 100%,” Shannon said, adding that in one example, Parker-Hannifin is using screenprinting to make sensors that indicate when elastomer joints on pipes at wastewater treatment plants are about to wear out.

“This technology opens up a hue number of applications,” Shannon concluded.

Dr. Joshua Windmiller CTO and founder of Biolinq, closed Track 3 with his talk, “Towards New Avenues In Minimally-Invasive Intracutaneous Electrochemical Biosensing.” Dr. Windmiller said that skin is the gateway to key fluids such as sweat and interstitial fluids, and Biolinq’s microneedles access interstitial fluid just under the skin without touching nerves or blood.

“There is a disconnect in healthcare today,” Dr. Windmiller said. “Wearabes don’t offer much information content, while lab work provides extensive information but is just a snapshot of one day. Biolinq aims to make biochemistry accessible at any time.”
Related Searches
Suggested For You

CPEIA Signs Unilever as a Member 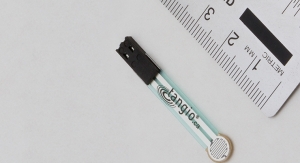 The Growth of the Printed Sensor Market 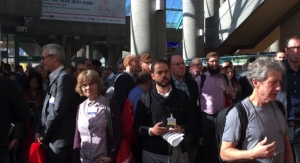