Solar Prize Marks Milestone with Round 3 Winner, Round 4 Semifinalist Announcements

US Office of Energy Efficiency and Renewable Energy Daniel R. Simmons announced Maxout Renewables and Wattch Inc. as the winners. 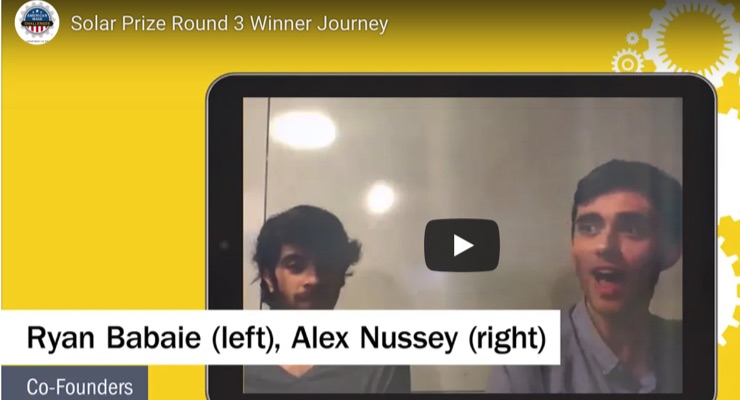 On Friday, Dec. 4, more than 200 solar industry experts, entrepreneurs, and enthusiasts joined a virtual Demo Day and Networking Event to find out which two teams would win the American-Made Solar Prize Round 3, each taking home $500,000 in cash prizes and $75,000 in technical support.

The Solar Prize competition is designed to reward innovators with cash prizes, valuable industry connections, and access to world-class laboratories for solving challenges faced by the solar industry.

The competition is split into three contests where participants showcase progress and vie for increasingly larger cash prizes. Each round brings a new cohort of ideas, competitors, and prize money, with $3 million up for grabs throughout the competition.

The two Round 3 winners were chosen for substantially and rapidly advancing their solutions from proof-of-concept to refined prototypes and finding partners to perform pilot tests of the prototypes. Both Maxout Renewables and Wattch had highly disruptive and impactful ideas that addressed gaps in the solar market. Additionally, they were able to quickly advance their technologies in a matter of months.

Maxout Renewables from Livermore, CA, created a cost-effective backup power source for homes running on solar, after witnessing power outages across the state due to wildfires.

It developed an appliance called the Evergrid, powered by a fly-wheel that can turn a residential solar installation into a microgrid. This home microgrid can keep delivering power during a larger grid outage while the sun is shining, making the Evergrid a cost-effective alternative to traditional battery backup systems.

“There are 2 million homes in the United States that have solar panels and no backup, so if the power goes out, the homes' solar systems shut off,” said Eric Cummings, founder of Maxout Renewables. “The cost of having a solar system that can support backup power in an emergency is at a premium—almost as much as a swimming pool. Given that it's out of reach for the vast majority of households in the United States, we came up with an appliance that's only about $1,000.”

Atlanta-based Wattch Inc. got started in 2016 when the company’s co-founders met at the Georgia Institute of Technology on the school’s solar racing team. The three teammates decided to use their experience collecting solar data to find a way to make solar systems more efficient.

It created cost-effective hardware and combined it with a solar monitoring platform to increase operational efficiency for commercial and industrial photovoltaic plants. The platform can provide predictive maintenance schedules, improve remote and automated diagnostics, and better model a plant’s lifetime energy yield.

“The ethos that we kind of got into this with is helping people get the most energy out of their systems,” Wattch Co-Founder Alex Nussey said. “And that means a lot of things—everything from just making business processes more efficient in helping you discover problems and solve them more quickly.”

Throughout the competition, both teams progressed quickly, using prize funding and forging connections to reach the next milestones in a matter of months.

“It probably spurred 2.5 to 3 years of development over the last 12 months,” Cummings said.

Thanks to their innovative ideas and ability to turn them into proofs of concept and eventually prototypes, the two teams were named as winners of Round 3, each walking away with a $500,000 cash prize and $75,000 in technical support.

The day brought not one but two Solar Prize announcements.

Jones-Albertus also announced 20 Round 4 semifinalists who will now participate as the next cohort of Solar Prize competitors.

Each of the teams earned $50,000 and is eligible to move on to the next contest.

With three rounds complete and Round 4 underway, DOE has now funded 80 solar startup teams with $10 million in cash prizes and an additional $2.7 million in technical support through the Solar Prize.

Across all four rounds, over 550 ideas have been submitted by entrepreneurs across the country, proving there is no shortage of ingenuity in the industry.

The Round 4 innovators started their journeys through the Solar Prize by submitting ideas in October 2020, thanks in large part to members of the American-Made Network who recruited and supported Round 4 participants.

The network is a part of the prize program that connects prize participants with world-class organizations that are ready to assist throughout the competition.

“I love getting a chance to talk with entrepreneurs. Each represents a special opportunity to learn something new and expand my network,” said David McFeeters-Krone of Intellectual Assets Corp., one of the network members that largely supported and recruited Round 4 participants.

Network members, called Connectors, are rewarded for helping teams with a variety of tasks, including funding, mentorship, and testing.

“Helping firms translate their assets into government needs is the key skill we used at this stage, as well as some cheerleading and advocacy,” McFeeters-Krone said. “We are looking forward to the next stage where we can help the semifinalists establish relationships with federal labs and other Connectors to help move their solutions to the next stage.”

Other critical Round 4 supporters include the Clean Energy Business Network and the Larta Institute. Without the mentorship, connections, and resources provided by these and other Connectors, the Solar Prize would not have nearly the same impact for competing startups.