FlexTech, a SEMI Strategic Association Partner, awarded five FLEXI Awards in the categories of Innovation, R&D, Leadership in Education, and, in a category new this year, Industry Leadership. This is the ninth year of the FLEXI Awards and the winners join a select group of companies and individuals from past years. Judging was done on a set of nominations based on a pre-described set of criteria, by a panel of non-affiliated, independent, industry experts.

This year’s Innovation Award goes to two companies, one in manufacturing and one in consumer products. The products were awarded for their outstanding design and ingenuity, with strong market adoption and significant revenue generation.

The first FLEXI Award for Innovation was awarded to Sensor Films Inc. (SFI), for its Starlight Digital Manufacturing Platform, which enables a modular approach to flexible and hybrid electronic manufacturing with large area deposition of functional and decorative materials on cut-sheet, flexible, porous or rigid substrates and is scalable to roll to roll production.

“We are truly grateful to be recognized by the FlexTech Alliance as the 2016 FLEXI Innovation Award winner,” said Peter Hessney, SFI’s president. “The award represents everything we at SFI having been working towards in bringing an additive manufacturing prototyping and production system to the emerging market of functional printing.”

Blue Spark Technologies wins the other Innovation FLEXI Award for their TempTraq product, the only available Bluetooth®, wearable temperature monitor in the form of a soft, comfortable patch that provides caregivers with continuous body temperature data for up to 24 hours to either an Apple or Android compatible mobile device through the free TempTraq app.

“It is an honor to be recognized by FlexTech Alliance not only for our flexible printed battery technology, but also the design and ingenuity of the application,” said John Gannon, president and CEO of Blue Spark Technologies. “We are enthusiastic about the future products that will further expand on the innovative technology that powers TempTraq, which has been so widely received in the consumer space.”

Scientists at the University of Massachusetts Lowell received the FLEXI Award for Research & Development for research conducted at the Printed Electronics Research Collaborative (PERC) and the Raytheon-UMass Lowell Research Institute (RURI). This award is given to the nominee evaluated highest for the research approach, originality and the commercial potential for expanding the scope for flexible or printed electronics or manufacturing processes or a real-world problem.

The PERC/RURI organization was recognized for its development of the novel BST ink, a ferroelectric nano-ink for printing electrostatically-tunable dielectrics on plastic substrates using direct-ink writing methodologies. The BST ink allows for realizing an all-printed high-frequency voltage variable capacitor for flexible, frequency-agile microwave applications such as phased array antennas and radar systems.

The Technology Leadership in Education Award was bestowed upon the National Science Foundation Center for High Rate NanoManufacturing at Northeastern University (CHN). The CHN in Boston has educated more than 130 students, half at the Ph.D. level on the topics of directed assembly-based printing, synthesis of organic semiconductor, and polymers engineering, leading to the development of the world’s first printer for nanoscale electronics on flexible or rigid substrates.

CHN has had an impact on established and emerging industries in sensors, electronics, bio/medical, energy, and materials fields by educating the next generation’s professional workforce. The CHN publishes extensively in industry journals, created tutorials and other programs to educate the general public, as many as 840,000 individuals. The award recognizes outstanding contributions to the industry through education and workforce development activities.

“The CHN is honored to receive the FLEXI Award for Leadership in Education,” says Ahmed Busnaina, the founding director of the Center and a professor of Mechanical Engineering. “We are proud of our many accomplishments in manufacturing and nano-scale printing such as graduating more than 130 students, more than 100 patents and developing the world’s first nanoscale 3D printer for electronics and sensors.”

2016 marks the inaugural year of the Industry Leadership Award to recognize and honor an individual who has shown particular dedication to building awareness of the capabilities and innovations which advanced flexible, hybrid and printed electronics bring to the broader field of electronics. As well, the individual has demonstrated outstanding thought leadership and vision for the industry in public forums, and association activity.

The judges and FlexTech acknowledged these contributions by Daniel R. Gamota, Ph.D., currently VP of strategic capabilities in the Engineering & Technology Services Organization at Jabil. Gamota has devoted many hours to the genesis of the industry through strategic roadmap development activities and standards work, including organizations such as IEC, IPC, iNEMI, IEEE, A*STAR, and the WTEC panel at the National Science Foundation.

“No one person could have much success without the cooperation of others in the emergence of a disruptive technology such as FHE,” Gamota said. “It has been a great pleasure in working with many of you in the advancement of the technology and the products they spawn.”

Third place was awarded to Talha Khan from Georgia Institute of Technology for his work on Solution-Processed Organic Photodetectors with High Detectivity.
Related Searches
Suggested For You

Due Date Approaching for 2017FLEX Abstracts 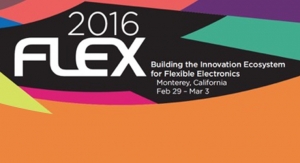 2016FLEX to Focus on Latest Advances in Flexible and Printed Electronics 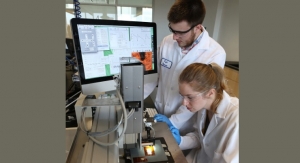