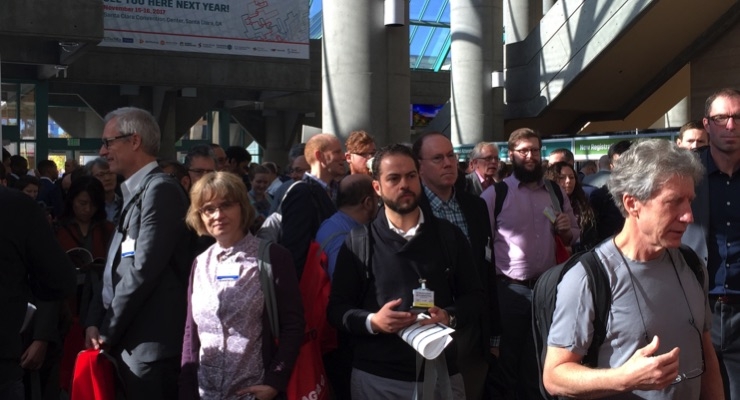 Printed Electronics USA 2016 headed into its closing session on Nov. 18 with plenty of news for attendees to gather during its eight concurrent sessions and more than 200 exhibitors.

“It has been really good,” Das said. “We have had a great turnout. We think we have had about 3,300 attendees and 209 exhibitors, up from 180 last year. What’s been really exciting is that a lot of things are coming to commercialization. We’ve seen a lot of simpler things that offer benefits.”

OSRAM has made significant inroads in OLEDs for the automotive market, with its OLEDs now appearing on the BMW M4 GTS and Audi TT RS.

“This year was a tipping point as we reached the mass market,” said Dr. Fleissner.

Dr. Fleissner noted that OLEDs have numerous advantages, as they can provide a mirror finish, be transparent, segmented, flexible, and are ultra-flat ultra-lightweight, consume less power and offer the potential for individual styling.

“We believe that the automotive market will be the first mass market,” Dr. Fleissner noted. “Automotive will be very much design driven, and will be followed by general lighting. Environmental exposure was a major challenge. Temperatures can range from -40°C to 105°C. There are horrible environmental conditions - humidity, temperature, corrosive gases and sunlight exposure.”

In Track 1’s session on Flexible Displays and Lighting, Ynvisible CEO Jani-Mikael Kuusisto discussed the company’s developments in his talk on “Printed Electrochromics: The Face Of The Internet Of Everything.”

“Our proprietary electrochromic displays are screenprintable on plastic or paper, and act as the face of smart labels,” Kuusisto said. “There is a pull in the market, and we are working with consumer brands.”

He was followed by Frank Christiaens, CEO and chairman of CLEARink Displays, who covered “Video Capable Reflective Displays For Ultra Low Power Applications.”

“Smart watches and phones are so power hungry that the displays need to be switched off,” Christiaens observed. “We offer extremely low power full color reflective displays for mobile Internet connected devices. We are focused on wearables and other applications.”

Exhibitors agreed that Printed Electronics USA 2016 was a success, as the concurrent sessions brought in new people interested in how they can use the technology.

Mike O’Reilly, director, Aerosol Jet product management at Optomec, Inc., noted that the show has changed from people just looking around to now having real applications.

“Some years ago, people would come by and ask what printed electronics are,” O’Reilly said. “Today they come by with real problem and we try to help them solve their problems. We try to fit in with the technology they have.”

Thin Film Electronics (Thinfilm) exhibited many of its latest successes, including recent collaborations with iOlive on authenticating olive oil, Hopsy on engaging craft beer customers, and Sarine to create digital identities for diamonds and gemstones.

“The show has been great, with a lot of steady interest,” said Marge Ang, Thinfilm’s senior director, marketing communications. “We cover a lot of diverse markets, and we are seeing increased interest in fast moving consumer goods brands. The market is growing, and we are scaling up very quickly.”

“We are getting huge interest in the X-1100, which offers a low cost entry into the flexible electronics market,” said Panico. “It is ideal for R&D and the lab, and customers can upgrade very easily. It is compact, easy to use and is cost efficient.”

Panico said that this year’s PE USA was the strongest yet. “This is the best one yet,” Panico said. “The level of attendee interest is definitely up.”

Panico observed that there is movement among equipment manufacturers to develop partnerships and integrate machinery.

“This is the time I believe that the machine makers are ready to develop partnerships with equipment manufacturers,” Panico noted. “People who are making machines want readily available modules that are low cost with a small footprint to plug into their systems, and that is our forte.”

“We are meeting companies that are focused on where our tools fit in for their end products,” Alkhafaji noted. “We are working on meeting with designers so they can integrate our capabilities. We are also now focusing on our stretchable inks, such as our Metalon HPS-FG32 silver screen ink, as well as our roll-to-roll tools designed for inkjet and for flexo.”

Frank Schaefer, sales director at KROENERT GmbH & Co KG, said PE USA 2016 was better than 2015. “We are having more contact with various industries,” Schaefer observed. “The show is so diversified, which is ideal for us. I am also quite surprised by the high number of international customers.”

“We’ve had good traffic throughout, people ranging from companies like Apple, Microsoft and Google to start-ups and a lot in the middle,” Jaye Tyler, president and CEO of Si-Cal Technologies Inc. – A Nissha Company, said.

“I feel like foot traffic and high quality contacts are up significantly,” said Dr. Brad Larson, SonoPlot’s co-founder and CEO.

“The diversity of the attendees is increasing with all new topics such as traditional printing, 3D printing wearables and sensors,” Luong added.

“Things are going very well,” Bjorlin said. “We are working on the Gwent integration. Their team and their portfolio are fantastic.”

Thomas Kolbusch, VP, Coatema Coating Machinery GmbH, said he saw a lot more attendees on the exhibition floor. “Day 1 was excellent compared to last year, as we had 30% more traffic and Day 2 has been good,” Kolbusch said. “We are seeing a lot of new faces.”

Mark Duarte, director of business development at Eastprint Incorporated, said that the show was very good, and is ideal for Eastprint’s expertise in functional printing.

“Functional printing is one of our core competencies,” Duarte added. “The first day was crazy. I’ve been attending since its inception and it is always growing.”

“This is our fourth year at PE USA, and this is by far the best we have seen,” Palazzolo said. “Traffic is way up. We have received many projects to start on, and are advancing some of our present projects further. There are more consumer good companies working internally on their own projects.”
Related Searches
Suggested For You 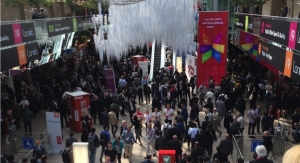 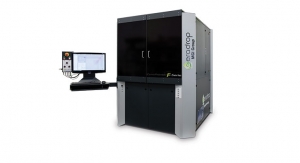 Recent Innovations in the Equipment Market